The pharmaceutical industry has a problem. Higher demand for high quality care, longer drug trial periods, and stronger regulation has diminished patents and created more wastage than ever.
PwC’s most recent ”Pharma 2020: From Vision to Decision” survey began on a promising-turned-ominous note. Healthcare technologies have grown significantly in the past two decades but so too has our dependence on this growth.
While people have more access and options when it comes to healthcare; the pharmaceutical industry is locked in what’s called “Cultural Sclerosis.” Most common in mature industries, this essentially means “tried and tested never fails” despite exterior advancements in strategic and cultural best practices.
Although the pharma industry is founded upon innovation – drug discovery is down and the methodologies used to discover them remain largely the same.
Patient expectations are soaring for healthcare (7.8% public spend increase yearly), but pharma’s old practices continue to damage research productivity and budget. This, and increased regulation can result in lengthy trials, low yield and sometimes no tangible results.
As demand grows, technology is encroaching more and more on pharma’s stagnant cultural legacy. In today’s post, we’ll explore how some technologies; 3D Printing, Nanotechnology, AI and Wearables are disrupting the pharma industry.

Before we explore diagnostics and therapy, we should observe how technology has subtly evolved human behaviour, in particular – how well we take care of ourselves.
Video games have long been associated with ill health, introverted social behaviour and were just about as culturally far removed from the gym as you can get.
Nintendo’s Wii Fit made large strides towards socialising healthy gaming but it wasn’t until mobile fitness apps became popular that we started to see big changes. All of a sudden, personal health was competitive.
Most people work with someone who says this: “Did you see my new PB (personal best) on MapMyRun?” on a regular basis. Your intense co-worker is obsessed with topping their own best time and this can only come from hard work, determination and a free-to-download application. NikeRun+, FitBit, DiaBet are applications for fitness, health, and illness-monitoring and are casually gamified. They have badges, medals, trophies and default goal-setting – all the hallmarks of a video game without being deliberate.
This is a sort of “behavioural design,” that encourages people to care about their health through a series of small victories. Their popularity has spawned a seemingly infinite amount of paired wearables from FitBit to SugarBeat to augment your fitness and overall health tracking.
There are actual games too. Pokemon Go and Clandestine that reward players for leaving their house and interacting with monsters that appear via augmented reality (AR).
Like other fitness apps, it counts your steps and rewards you for being active. This is a more passive way of encouraging people to buy in on “digital health coaching.”
People are no longer obsessed with solutions; pain relievers, medicines, gimmicky diets – they’re obsessed with badges, trophies, and preventative measures.

“The great tragedy of science – the slaying of a beautiful hypothesis by an ugly fact.”

Referred to as “The Fourth Industrial Revolution,” the scope for Artificial Intelligence – like the human brain – is seemingly endless. Technology like IBM’s Watson can understand unstructured data – which is around 80% of all data – including literature, articles, blogs and voice.
It relies on natural language governed by grammar, context and culture meaning it’s not just searching for keywords – it understands. After being fed data or a “corpus” it then teams up with experts-in-their-field who begin contextualising answers.
No industry looks to benefit more than pharma, which is dealing with the biggest productivity crisis in its history. A Deloitte UK Health Centre report stated that the returns on research and development cohorts have fallen from 10.1% to 3.7% since 2010. The average time it takes to bring a new drug to ‘market-readiness’ can take up to 15 years. These factors have ramped up drug trial costs from research to approval at an average $2.6 billion, taking into account the cost failures of “thousands and sometimes, millions of compounds.”
– PhRMA, Biopharmaceutical R&D: The Process Behind New Medicines 2016
Put into context, the cost of the approval process was an estimated $1.3 billion per drug in 2007 – doubling the price over a mere ten years.
For these reasons and many more, pharmaceutical giants like Pfizer and GSK were quick to invest in the technology. It allows organisations to quickly share expertise and improves how people across different fields can collaborate. It allows research teams a data-driven acceleration to early drug trial stages, saving on the cost of failure.
Soon, pharma companies will be able to “tap into a much broader chemical space” meaning they will be less inhibited by overheads, allowing the discovery of more drugs and procurement of patents.
It doesn’t stop at development, AI is innovating patient support and treatment across the board.
AI like IBM’s Watson is being used for a tonne of services. Harrow Town Council have augmented Harrow’s Town Council’s Watson Care Manager, while GSK are working on Alphabet Bioelectronics, what they believe is “transformational innovation” for treatment.
As AI ages it will allow it us to glean previously unnoticed insights and could revolutionise how we take care of ourselves and others.

While 3D printing was conceptualised along with the classic inkjet printers in the 1970s, it wasn’t until the technology evolved did we realise digital printing’s full capabilities.
The invention of Stereolithography in the 1980s allowed printers to harness materials like plastic, resin and even gold to create objects from data. This laid a foundation for what we can accomplish today.
Applications like human tissue-printing, artificial limbs and 3D printed pharmaceuticals and more – the  industry is expected to be worth $30.9bn by 2022.
Due to the scope for medical 3DP, this is by no means a comprehensive review. Instead, we’ll have a quick overview 3DP’s impact on medical services and explore reasons why the pharma industry needs to take notice.

“We believe 3DP could lead to a revolution in the treatment of diseases like osteoarthritis and other causes of tissue damage”
– Dr Adam Perriman, Cellular Medicine Expert at the University of Bristol

– We can now print human tissue for drug trials, bridging the gap between animal and human testing. This will cut back on risk, hypotheses testing and increase lab productivity.
– Companies like BioBots are big disruptors of the tried and tested pharma-method.
– Combined with Artificial Intelligence, the approval percentage and speed of production of trial drugs can increase vastly.
– While we cannot print transplantable organs, the testing implications are huge. Researchers believe that this will advance drug approval to the point that we won’t need to print transplantable organs.

“For the first time, this process means we can produce tablets much closer to the patient.” – Dr. Mohamed Albed Alhnan, Pharma Lecturer at the University of Central Lancashire.

“We believe it will revolutionize the prosthetics field. It will lower the costs worldwide.” – Dr. Jorge Zuniga, Biomechanics University of Nebraska, Omaha.

— Due to the need to custom-fit every patient, traditional prosthetics cost between $5,000 – $50,000 with 2 weeks production time minimum. 3D Printing reduces these figures to around $50, and takes only around a day.
— Patients report more comfort and accessibility with their limbs.
— Parents of children – who quickly outgrow prosthetics – are among the biggest beneficiaries, who can now upgrade their limbs as they grow. 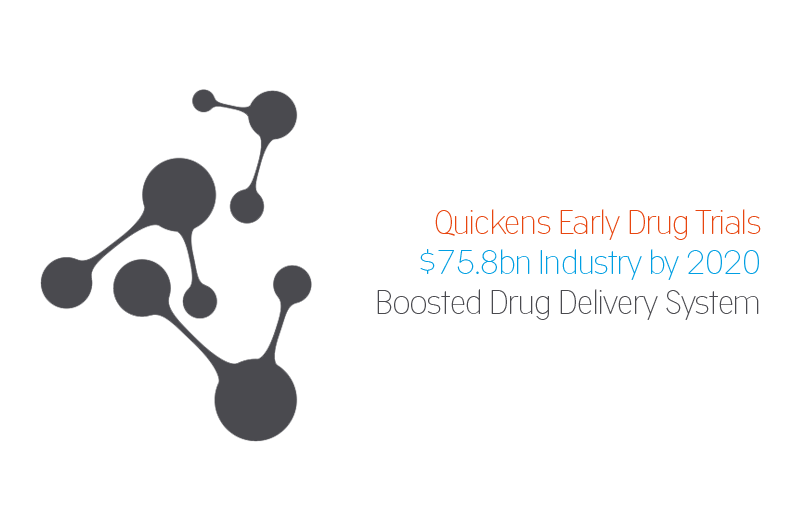 Most reading this far will have heard of nanotechnology, whether it was in a medical journal or a sci-fi film like Star Trek: First Contact. It’s essentially technology that occurs on an exceptionally small-scale.
A favourable shift in patenting, a need for pharma-culture adjustments, availability of venture capital and overall public interest has put tiny tech centre stage.
Nano has become a key factor in shifting the pharmaceutical industry’s reliance on the next “Blockbuster Drug” to a more “Personalised Medicine” model. The revolutionary tech allows for compound reformulations that can extend the longevity of a drug, saving on R&D overheads – enabling further drug discovery.
Nano-compounds can also be used to target viruses while stealthily evading standard immune responses, reducing toxicity for a more discerning customer. Put simply, less post-treatment sickness.
According to Nanotechnology Market Outlook 2020, RNCOS, the industry is set to be worth over $75 billion by 2020, and some companies – like Pfizer – have already gotten a head start. Pfizer, who famously used nanotechnology to improve a drug’s solubility and achieve FDA approval. The pharma-giant’s early moves have netted them close to $20bn.
This punctuates the need for companies operating in the pharmaceutical industry to formulate a nano-strategy because small tech is making the biggest impact on the industry.

The pharmaceutical industry’s conservative technology approach is concerning, considering tech could very well cure its merger and acquisition dependency. By embracing new technologies, companies could be empowered to embark on new drug discoveries with the resources to back it up.
There is an onus on those working in pharma to be technologically informed. Researchers don’t have to learn how to write code or become bioprinters but to get the best results, technical awareness will be a key skill by 2020.

Want to Learn More About Technology?
Download the Bluffer’s Guide to Talking Tech.

Retraining As A Programmer

Retraining and Covid-19 – Umschulung in Zeiten von Corona  The interest in retraining – or Umschulung in German – and the associated Jobwechsel, career change, is growing, especially since the Coronavirus has impacted our places of work. Many industries are severely affected and react with so-called Kurzarbeit or layoffs. However, this does not apply to […]

Working in the Industry: Interview with a Wix Software Engineer

Profile and Professional Experience Name: Avishai Ish-ShalomCurrent Title: Software Engineer at Wix.comPast Positions: Co-Founder and CTO at fewbytes, Infrastructure Group Leader at Leaway Enterprise, and Public IT Center Manager at The Hebrew University. Experience: 10+ yearsMost Important Coding Language: JavaScriptMotto: “In a world where every device has an API, everything is a software problem”. Career […]

We are delighted to announce that our course in full stack software development is now eligible for Swedish student loans and grants through CSN (Centrala studiestödsnämnden). This is excellent news for students based in Sweden who wish to pursue a career in the tech industry. Below is a guide to how to apply for CSN funding.