Open up a random webpage or app. One of the famous ones, maybe Gmail or Twitter, or the omnipresent Instagram. Now, put yourself in the shoes of someone who’s never used one of these sites or apps before. How do you send a tweet? What about composing an Instagram post? How do you create a new email? Is the user interface what it should be?

User Interface – the point of interaction

It’s not obvious, is it? I mean, in some cases, it’s really, really not obvious. The user interface is the point at which the software developer and the actual person in the street interact. Not directly, obviously, but through the medium of the software you’ve created, and how those people — not software developers nor IT experts — use your software could well define your career and your future prospects.

In other words, the UI — the User Interface — has to be right. Those three examples — Gmail, Twitter, and Instagram — are certainly not the worst examples I could have picked, but they are representative of a general design malaise when it comes to making software easy and simple to use. Part of the problem is that we all have very high-quality, ultra-hi-def screens sitting in the pockets of our jeans these days, so naturally, app designers and software developers want to make their end product look good on those screens.

Where design comes into your user interface

That’s where design comes in, but a compounding problem is the sheer number of apps and programmes now competing for our attention as users. Design has long been a strong differentiator when it comes to creating appeal for a product or service, so naturally one of the first recourses is to make everything look slick and shiny.

The trouble is that slick and shiny don’t always, or even often, make for a process of interaction that makes instant and straightforward sense to the end-user. Google, Twitter, and Instagram get away with this sort of UI muddle because they’re just so big, so omnipresent, that their UI almost doesn’t matter anymore. Everyone uses them so, in the worst-case scenario, you can just ask the person next to you and they’ll probably be able to tell you how to use them.

Is that good enough, though? Or, for that matter, is it good that I — tech geek that I am, and someone who’s currently on his sixth laptop, seventh iPhone, and second smart TV — still can’t work out how to ‘re-tweet’ an Instagram post?

So, what’s to be done. Well, the first and most obvious thing is to keep your design and layout of UI simple. Put yourself in the mind of someone coming to the software for the first time, or better yet ask non-techy friends and family to do a little beta testing for you. Make things obvious — this doesn’t mean that you have to have gigantic yes/no buttons everywhere, but just do some small things such as grouping buttons and click points close to the thing that they operate.

Above all, recognise that design for design’s sake is rarely the right route to go down. Think back to the original Apple iPod. It was lauded for being a design revolution at the time, but remember that it was incredibly simple. The UI was a click wheel, a play and pause button, and the old graphical interface from the Mac II computer of the early nineties. Did those graphics look cutting edge or space-age-y? No. Did they work? Yes. Simplicity really is king.

Software development is important to every industry in today’s business world. All businesses depend to a certain degree on it. Have you ever used HTML before? Do you know anything about it? What about CSS? Or JavaScript? If you want to learn a bit of HTML, CSS and JavaScript, then try our free 5 Day Coding Challenge. It will teach you some of the basics of what powers the pages and apps that we use. Register for the challenge through the form below.

React was first created by a software developer in Facebook by the name of Jordan Walke. It is an open-source front-end Javascript library that Facebook maintains. It is also one of the most used front-end libraries in the world. And, developers with React.js skills are among the most sought-after programmers in the world. What is […] 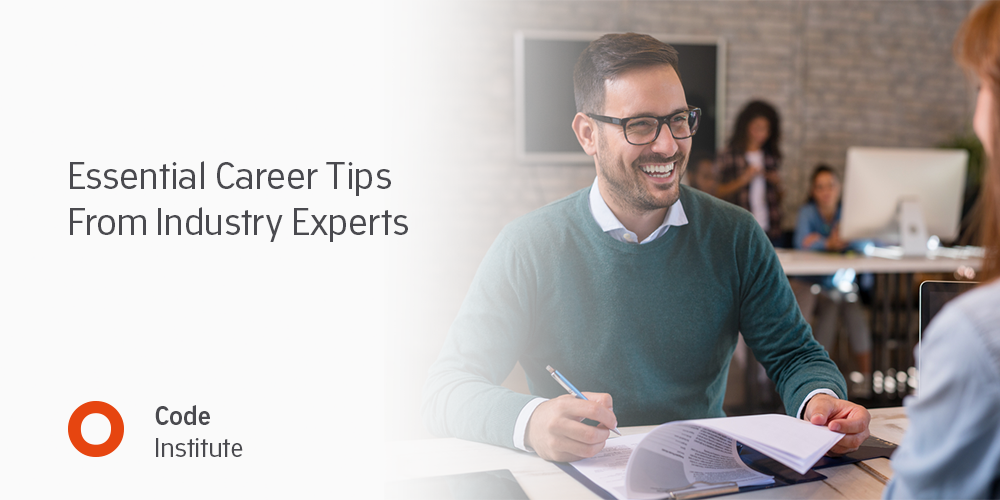 Industry Experts Tell All We’re passionate about a few things at Code Institute, but our ultimate goal is to ensure that our graduates find their ideal job in software development. We want to help you to navigate your new career landscape with confidence and capitalise on all the job opportunities that come your way.We created […]