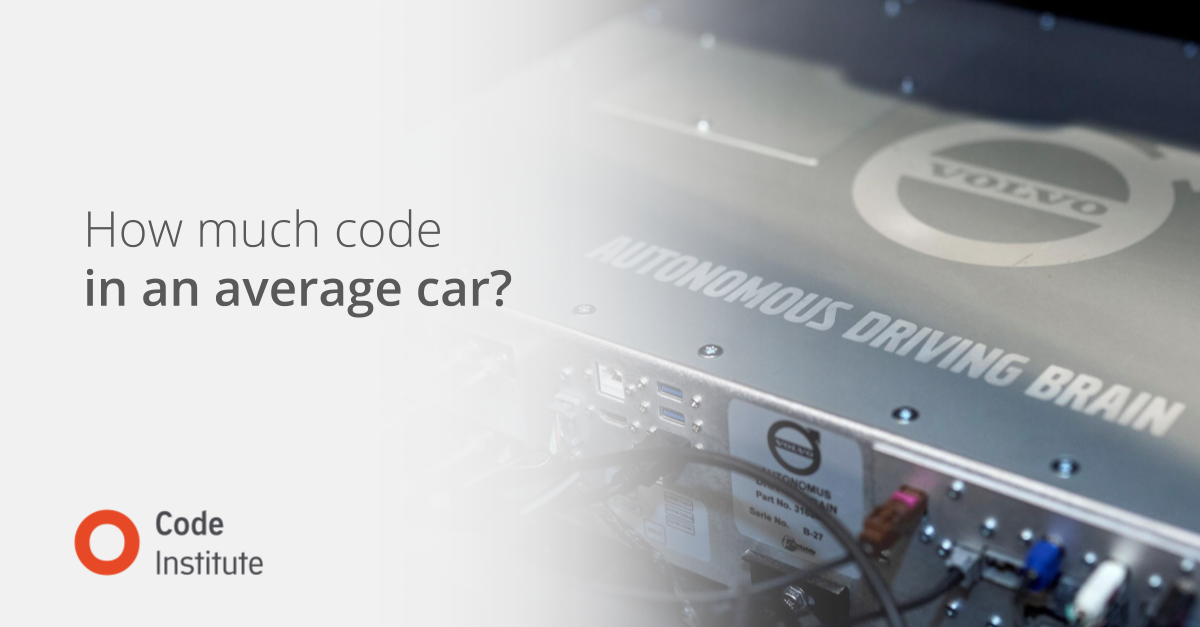 We write about it often. Software developers are in high demand. These are the people who create the code that is inputted into the apps, the websites, the cars, the planes, the phones, and so much more of the items that we use from day to day. Look at a paper bag for example, while there’s know digital parts within that bag, there are lines of code used to create it, design it, and even print the words that are on it. We’ve decided to look at just how much code goes into these items that we use so often. This week, our chosen object is… Cars.

If you’ve ever done the free 5 Day Coding Challenge with us, you may recall one of the videos where our Program Director, Brian O’ Grady, tells us that there are 150 million lines of code in the latest model of the Ford F150. That’s a lot, but the F150 is no ordinary car, it’s a beast. Another surprising Ford factoid is that apparently, the new Ford GT uses more lines of code than a Boeing 787. The GT, according to the linked article, has in the region of 10 million lines of code. The same article, which quotes Australia’s Car Advice as its source, tells us that a Boeing 787 Dreamliner has 3 million lines less.

The amount of code cars use should not surprise us. Everything has changed in the motor world. Technology plays a massive part in all of the cars that we see on our roads. First off, every component of a modern car is connected to the central computer (ECU). There are sensors that redirect information through the Controller Area Network (CAN) from every corner of what we drive. From the electric windows to the airbag controller, from the tyre inflation monitor to the air-pressure sensor… I could go on, but I won’t. Cars are jam-packed with tech and this technology is created with lines of code.

It shouldn’t really surprise anyone. Think about it. Every day you probably pass an article on autonomous driving in your LinkedIn. In Japan, Mazda’s are now communicating with trams. Volvo is trying to get their cars to communicate with each other. At the moment, they are testing technology where their cars pick up information from the road, like potholes for example. The coordinates of that pothole are then sent to the cloud. The cloud then relays the information to other Volvo cars and to the regional council for the area the pothole is in.

Safety technology has advanced hugely in the last couple of decades, and now we are looking at vehicles that detect accidents before they even happen. Volvo’s city safety, for example, attempts to automatically stop a car before it crashes using sensors all around the car that can detect objects and movements. Some cars can now park themselves. Others can be monitored using apps and tracking devices. These apps can remotely tell you everything from the temperature of the car to the amount of fuel left in the tank.

This tech is not limited to the aforementioned companies. They all use similar devices. Another aspect of cars that has changed over the last couple of decades, which requires more code, is infotainment systems. Our cars now have capabilities to integrate apps from Apple, like CarPlay, and from Google, like Android Auto. Hell, you can even use Spotify. Cars can now read USB sticks, show videos, play music through Bluetooth, and update navigation maps on the fly. It’s all truly incredible.

How much code? The average car.

To answer my question though, how much code is there in new cars? So, all cars will differ, however, it’s said that new cars, on average have circa 100 million lines of code each. That’s a lot. But the way things are going with autonomous driving and Advanced Driver Assistance Systems (ADAS), these numbers are going to grow substantially.

Knowing that code effects pretty much everything that we do today highlights the importance of software developers. It also highlights why they are in such high demand. Asking how much code is in something will always throw up different answers, and it’s important to know that even the smallest amount of code can be complicated to create – however when it comes to code, the results can be so satisfying.

Interested in becoming a software developer? Why not try our free 5 Day Coding Challenge?

What is a CDN?

Whenever you click on a website, you will see that the website loads in minutes and displays its content. What if the webpage’s content takes minutes or even hours to load? You’ll most likely become annoyed and leave the site. Businesses use CDNs on their websites for this purpose. A CDN improves and enhances a webpage’s […]