Your one-stop solution to all things code 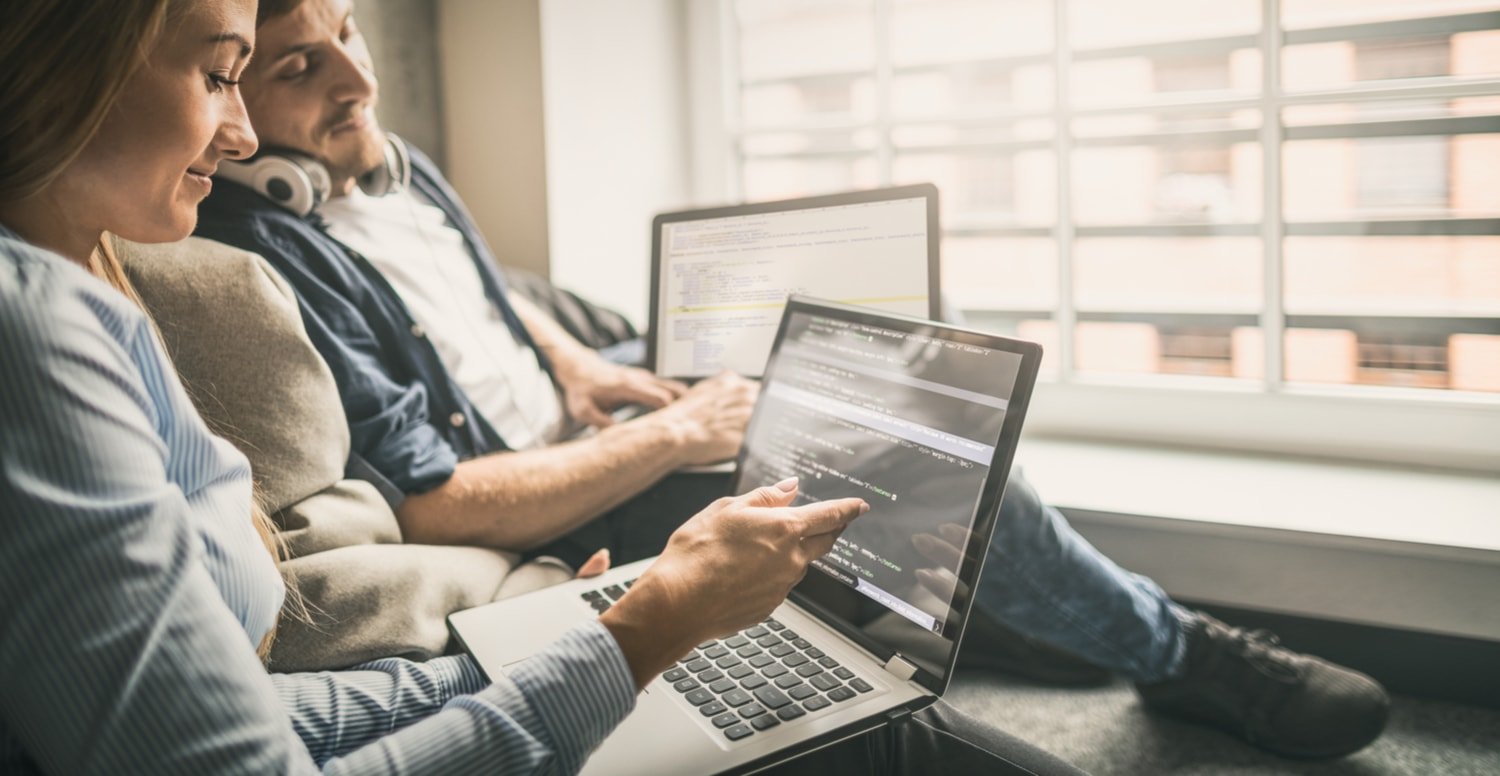 The world is rapidly changing, and there has never been a more critical time for people to learn to code. As people, nations and workers, we have never relied so much on new technologies. On a personal level, we utilise technology more to take care of social tasks, like using social media, managing our calendars, or even remotely turning on the heat in our house on a cold day. On an international stage, we’re now talking about building and utilising a single digital currency, whereas, in the workplace, our employers are now automating more and more tasks and using the newest technologies available to them. As a result, companies need two things

Firstly, they need and are actively searching for employees with the right digital skills to manage automation. Secondly, they require software developers to manage these new technologies and build the future for them.

Career changers are capitalising on this lack of software developers, and the wise are taking the opportunity now to upskill and reskill to prepare them for a digital future and to take advantage of the excellent salaries that developers are earning. The good news is, software development is a skill that can travel with you and the high salaries it attracts is not just unique to any single country. For example, average salaries in countries like Sweden, Germany, Ireland, the UK, the Netherlands, and the USA, are very attractive. To learn to code now makes sense

There is a cliché in the market that says all businesses are now technology businesses. However, just because it’s a cliché, does not mean that it’s not a true statement. Think about it. Most good businesses now have a website or an app. Every industry is now working with some dependency on the latest technologies.

Of employers find it difficult to hire digital staff

Jobs which will vanish by 2030 due to automation

Benefits of Being a Software Developer

So, what are the benefits of being a software developer? As of right now, there is a massive digital skills gap all around the world. It is estimated that between now and 2022, there will be between 1.2 and 1.5 million unfilled ICT roles – as highlighted in our white paper, “Digital Skills Crisis – Time to Act”. On account of this, software developers are on the beneficial end of supply and demand. There are not enough digitally skilled workers to fulfil industry needs. For example, in Sweden alone, there is expected to be up to 70,000 unfilled ICT roles by 2022. Other examples of this shortfall can be seen all around Europe, including in countries like the Netherlands, Germany, the UK, and Ireland.

However, apart from excellent salaries, a career change to software development is a shift to one of the most exciting industries in the world.

It’s no secret that professional software developers can make a small fortune. Their skills are highly sought after, making them precious commodities to companies. There is also a huge opportunity for coders to freelance remotely, making considerable revenue for little commitment. Depending on your role, and skills learnt, these salaries will vary. Below is an average salary earned by a software developer across three key markets.

*Based on 5 years’ experience in software development in New York, London, Stockholm, Amsterdam, Berlin and Dublin

Python was first released as a coding language in 1991 by a Dutch programmer called Guido van Rossum. As you might have guessed from the name of the language, he was a fan of Monty Python’s Flying Circus. Van Rossum aimed to offer a language that could “combine remarkable power with very clear syntax”.

Python plays a large part in many current and future technologies, and it is an integral part of Google, Wikipedia, and NASA. As a language, it is used widely for many emerging technologies in Fintech, HealthTech, AgriTech, and much more besides. Python is widely regarded as the best language for increasingly-popular automation technologies, and many developers consider it as the top programming language for Artificial Intelligence (AI).

It is an extremely powerful language, but we chose it because it is what industry demands right now. An added benefit to learning to master Python is that it is considered to be one of the most accessible programming languages with which to learn to code.

HTML or Hypertext Markup Language is what software developers use for annotating text files. Using HTML is essential for constructing, embedding, and hyperlinking effects on the internet.

CSS or Cascading Style Sheets is what allows you to add style to your website. This web-based markup language defines the look and feel of a site.

JavaScript is ubiquitous. JavaScript is inescapable. JavaScript is part of almost every interaction between the code and the end-user, given the fact that it is used by approximately 88.1% of all existing websites.

Java is a widely-utilised coding language. It is the primary language for Android development and is popular in desktop, web, mobile, and enterprise applications.

C++ was initially meant to be an extension of C Language, but its popularity has allowed it to be a language in its own right.

Ruby is an open source language that has elegant syntax. It was made popular by the Ruby on Rails framework, and it helps developers to build websites and applications because it simplifies repetitive tasks.

Flask is a micro web framework that does not require particular tools or libraries. Written in Python, it combines with the tools and libraries that you need to build web applications.

PHP is a free, server-side language designed for dynamic websites and app development.

C is one of the older, widely-used programming languages and was created in 1972. As a language, it offers excellent control and efficiency.

What is Full Stack Development?

Full Stack development takes into account both the front and the back end of an application.  Everything that runs in a user’s browser is the front end. The back end runs on a server.

The front end is the public-facing side of any application. It’s what the user sees in their browser and is generally the most attractive part of any web page. It’s what keeps your users interacting with your site. This can be as stylish or interactive as you need it to be, but it must be enticing to your target audience.

Back end development is everything that runs on the server that makes your front end appear so excellent and powerful. It’s where most of the data manipulation goes that allows your site or application to operate so efficiently. Things like business logic, calculations, database interactions, and performance are included in the back end.

Full Stack development refers to a developer who knows the operation of both the front end and the back end. All Code Institute students graduate, on successful completion of the program, as Full Stack developers.

Studies show that at some stage, imposter syndrome affects up to 70% of people in every occupation and demographic. It should, therefore, be no surprise that many career changers experience it when they change from one role to another.

Imposter syndrome is prevalent, but there are many things that people can do to deal with it. Our first piece of advice on this would be to remember that it’s so common that it’s normal. Also, it’s always good to talk to someone that you trust. As the saying goes, “a problem shared is a problem halved”.

Right now, there are thousands of unfilled software developer roles around the world. There are so many roles that require software developer skills, and these are not just in the technology industry. Developers are spoiled for choice.  It’s also an excellent time for new developers or people who have only recently decided to learn to code. Starting salaries in software development are incredibly competitive and attractive

Here’s the thing. As more roles become automated into the future, the number of software developer jobs are expected to multiply as workers reskill or upskill to make a career change.

*Above figures are based on predictions for 2020 ICT skills shortages.

ICT stands for Information and Communication Technologies. The booming ICT industry combines information technology with all forms of telecommunications which include smartphones/mobile phones, wireless networks, the internet, and more.

ICT skills cover a broad remit. To a certain degree, sending an email, for example, would indicate extremely basic ICT skills, as would sending out a tweet or posting on Facebook. However, for many roles in the future, a lot more skills will be needed to operate day to day work. Fundamental ICT skills include knowledge of HTML, CSS, and more complicated Javascript. At the very least, many professions require a basic understanding of code and how it works.

In many jobs, basic ICT skills are now becoming part of the key competencies needed to secure the role. Also considered to be an ICT skill is an understanding of social media beyond sending a simple tweet or post out on a network. Similarly, being able to attain, analyse and understand analytics from online actions are proving to be of immense importance. The stronger your ICT skills are, the more valuable you are to all industries that utilise information and communication technologies.

Our Full Stack Software Development program is the perfect online program for potential coders who want to learn to code. It’s the ideal way to fast track into the most exciting industry in the world, and it’s an industry that offers excellent salaries and working conditions. Our program is the only online bootcamp of its kind in the continent of Europe that is university credit rated. If you’re thinking about how one would learn to code, an excellent first step is to try our free 5 Day Coding Challenge, to see if you have an aptitude for software development.

Trusted by these leading companies

Or email us at info@codeinstitute.net